Crimes by Moonlight: Mysteries From the Dark Side 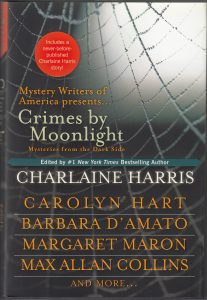 Nighttime is the perfect time for the perfect crime—especially in the realm of the paranormal. Featuring fascinating, frightening, and sometimes funny stories by Mystery Writers of America including Carolyn Hart, Barbara D’Amato, Margart Maron, Max Allan Collins and Mickey Spillane, and Elaine Viets, Crimes by Moonlight is your portal to the dark side and all its wonders.

Mystery Writers of America presents an all-original anthology sure to appeal to Twilight fans with an interest in crime. While vampires are well represented among the 20 selections, most notably Parnell Hall’s darkly humorous Death of a Vampire, bestseller Harris ensures that werewolves, ghosts, and magicians also get their due. Harley Jane Kozak does a superb job of integrating a ghost into a contemporary setting in Madeeda, in which an expectant mother is concerned over her two-year-old twins’ visions of a bad witch. A phantom ship figures in Lou Kemp’s In Memory of the Sibylline, a highly effective horror story set in the 19th century. Even Mike Hammer gets into X-Files mode in Max Allan Collins’s and Mickey Spillane’s Grave Matter, which successfully introduces a supernatural element into the case of a series of mysterious deaths in the ironically named town of Hopeful, N.Y. Other contributors include William Kent Krueger, Margaret Maron, and Carolyn Hart.  Publishers Weekly