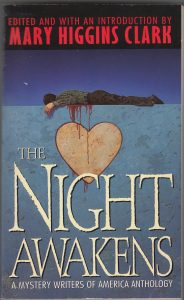 The crowned Queen of Suspense, #1 New York Times bestselling author Mary Higgins Clark, has no peer in the realm of stylish, sophisticated thrillers — brilliant, breathtaking tales that delve into the deepest affairs of the heart, the darkest crimes of passion. Now, in that same haunting tradition, she invites a star-studded cast of authors to share original stories of men and women joined in love…and driven to murder.

Sara Shankman puts a chilling new spin on payback…Joseph Hansen slaps a rancher with a cold wake-up call out on the trail…Loren D. Estleman cuts a honeymoon short when a bride learns she’s married to the mob…Brendan DuBois drives a brother to distractionon the road to revenge…Sally Gunning pushes jealousy to a murderous extreme…Nancy Pickard exposes the truth behind the headlines as a young love leads to old-fashioned homicide…and a panoply of other renouned writers spellbind us with the seductive charms of love, lust, and other lethal attractions.

Review:  These ten short stories are read by a variety of narrators, which adds a wonderful dimension to the overall quality of the production. Since most of the mysteries start and end on one side of the cassette, it is very easy listening. The plots are quickly developed, and the listener gets to see if s/he can solve the tale before the tape is over. Although each thriller has its own unique qualities, Sarah Shankman’s “All You Need Is Love,” perfectly read by Paula Parker, Noreen Ayers’s “Delta Double Deal,” read by Charles Turner, and Nancy Pickard’s “Afraid of the Dark,” read by Eliza Foss, are especially good matches between the story and the reader’s interpretation. Highly recommended, this should circulate heavily in public libraries, or where detective stories and mysteries abound.  Library Journal