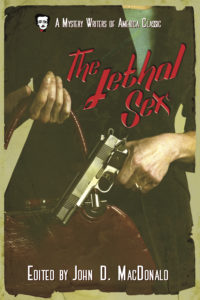 The female of the species is absolutely deadlier than the male in these 14 cunningly-crafted tales of suspense, crimes of passion, and murder, all by women writers. Edited by MWA Grand Master and bestselling mystery author John D. MacDonald, these bone-chilling stories show the depths both men and women will stoop to get what they want. Christianna Brand brings us a story of two sisters who engage in the ultimate cat-and-mouse game, with the prize being their lives. A woman accustomed to the finer things appears in Margaret Manners’ twisting tale of a socialite who will go to any lengths to keep what’s hers. Carolyn Thomas spins a tale of long-overdue revenge in the balmy Caribbean. From Veronica Parker Johns come the story of a cheating wife who’s too clever for her own good. And Juanita Sheridan delivers a marriage slipping toward disaster amid the tropical paradise of Hawaii. Fourteen tales of scheming women (and even a few dangerous men) told by the very best classic women mystery writers as they reveal…The Lethal Sex.

“He Got What He Deserved” by Bernice Carey

“Tea for Two” by Margaret Manners

“The Withered Heart” by Jean Potts

“To Be Found and Read” by Miriam Allen deFord

“A Matter of Ethics” by Carolyn Thomas

“What Is Going to Happen?” by Nedra Tyre

“No Trace” by Veronica Parker Johns

“There are No Snakes in Hawaii” by Juanita Sheridan