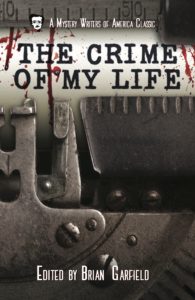 In 1984, Mystery Writers of America brought together a roster of authors that has rarely been equaled before or since. Every living MWA President (including several who were also Grand Masters) was asked to select one of their own published stories and write a brief introduction as to why it was their favorite one. The resulting volume, edited under the keen eye of author and screenwriter Brian Garfield, contains some of the finest crime and mystery stories of the previous 50 years.

Dorothy Salisbury Davis delights with tale of a most unusual art “heist.” Master of the macabre Robert Bloch is in fine form with a story of a con man who takes advantage of lonely women, until he meets his match in deception. Helen McCloy goes to the other side of the world for her engrossing story of 19th century China. John D. MacDonald introduces us to a salesman suffering from the wickedest of hangovers, and bestselling French author Georges Simenon tells a cat-and-mouse tale between a mild-mannered tailor and the serial killer he believes is living across the street from him.

Thirteen masterful tales of mystery and suspense, selected by the people who know them best—the authors themselves.

“The Man Who Knew Women” by Robert Bloch

“The Purple Is Everything” by Dorothy Salisbury Davis

“The Question” by Stanley Ellin

“Blessed are the Meek” by Georges Simenon

“Give the Devil His Due” by Lawrence Treat

“Galton and the Yelling Boys” by Hillary Waugh