The Blue Religion: New Stories About Cops, Criminals, and the Chase 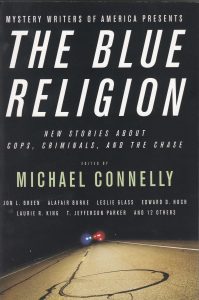 From Hawaii at the turn of the twentieth century to the post-Civil War frontier, from smoggy Los Angeles to the woods of Idaho, these gripping stories trace the perils and occasional triumphs of lawmen and -women who put themselves in harm’s way to face down the bad guys. Some of them even walk the edge of becoming bad guys themselves.

In T. Jefferson Parker’s “Skinhead Central,” an ex-cop and his wife find unexpected menace in the idyllic setting they have chosen for their retirement. In Alafair Burke’s “Winning,” a female officer who is attacked in the line of duty must protect her own husband from his worst impulses. In Edward D. Hoch’s “Friday Night Luck,” a wanna-be cop blows his chance at a spot on the force–and breaks his case. In Michael Connelly’s “Father’s Day,” Harry Bosch faces one of his most emotionally trying cases, investigating a young boy’s death.

The magnificent and never-before-published Connelly story is alone worth the price of admission, and-combined with 18 unexpected tales from crime’s modern masters-makes this an unmissable collection.

Review:  Three veteran narrators join editor Connelly in presenting 19 stories that explore the lives-on and off the job-of the men and women who wear a badge. As with any anthology, these stories vary in caliber, but the readers succeed in bringing each to life. Highlights include Karen White’s fine readings of “Skinhead Central,” a story showing that cops are always cops, even if they’re retired; and “Winning,” Alafair Burke’s affecting story of the lengths people will go to for the ones they love. John Lee provides just the right amount of youthful angst in Peter Robinson’s “The Price of Love,” a touching story of a young boy’s defining step toward manhood. But it is Alan Sklar who shines in his readings, especially with Jon L. Breen’s chuckle-inducing “Serial Killer” and Connolly’s own heart-wrenching “Father’s Day.” These stories of justice and those who deliver it are well served by these narrators.  Publishers Weekly