In the Shadow of the Master 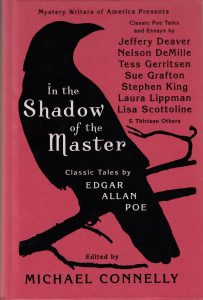 In the Shadow of the Master

In the Shadow of the Master is an exceptional collection of classic stories from the lord of literary darkness himself—the inimitable Edgar Allan Poe—accompanied by enthralling essays from twenty of his bestselling acolytes and admirers. With appreciations by Michael Connelly, Stephen King, Lisa Scottoline, Tess Gerritsen, Laura Lippman, Nelson DeMille, Lawrence Block, and thirteen others, In the Shadow of the Master is a must-have for thriller and mystery fans of all ages.

Mystery Writers of America presents a collection of Poe tales with afterwords by 20 distinguished writers who honor Poe’s powerful influence on the modern crime story. Stephen King, reflecting on The Tell-tale Heart, credits Poe with writing the first tale of criminal sociopathy. Lisa Scottoline, in her perceptive appreciation of William Wilson, cites a score of contemporary works that silently acknowledge its influence in their exploration of the spookiness that comes from the fragmenting or doubling of the self, and the splintering of identity. P.J. Parrish, writing reverently on The Black Cat, praises it as, among other things, an early example of genre-crossing in its splice of horror and detection. Contributions from Lawrence Block, Sue Grafton, Sara Paretsky, Tess Gerritsen and others—many of them Edgar winners—vary in their appreciation from the deeply personal to the respectfully analytical, and from the lightly humorous to the deadly earnest.  Publishers Weekly

*Starred Review* What mystery novelist worth his or her advance isn’t indebted to the dark-souled inventor of the detective-fiction genre? And what reader hasn’t left the lights lingering a little longer after indulging in one of his tales? This compulsively readable collection, commemorating the 200th anniversary of Edgar Allan Poe’s birth, unites some of Poe’s best short works (including The Black Cat, The Raven, and The Fall of the House of Usher) with commentary by a slew of Edgar Award winners and nominees. Here readers find T. Jefferson Parker reflecting on the awe he experienced, as a 12-year-old boy, upon reading the unforgettable opening lines of The Cask of Amontillado. And Nelson DeMille as a teenager, quivering in his boots as he cuts through a cemetery after seeing the 3-D movie based on The Murders in the Rue Morgue. Novelist Lisa Scottoline, who didn’t buckle down and read Poe until adulthood, writes about Poe’s spooky representations of the splintered self that inspired her own prose. Editor Connelly recounts a memorable, albeit terrifying, night in a hotel room spent under the author’s spell. Opining on The Tell-Tale Heart, Stephen King doesn’t miss a beat.: Poe foresaw the darkness of generations far beyond his own, he writes. Ours, for instance.   Booklist