Death Do Us Part

Death Do Us Part:  New Stories About Love, Lust, and Murder 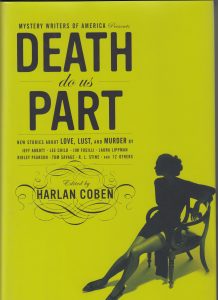 The latest anthology from Mystery Writers of America offers a high quality assortment of stories propelled by human passions behind crimes both hot- and cold-blooded. Despite the participation of such noted authors as Coben, Charles Todd, Laura Lippman and R.L. Stine, the gems come from lesser knowns. The standout is Charles Ardai’s “The Home Front,” a noir tale that Cornell Woolrich fans will relish, recounting the travails of a WWII-era federal agent whose role in the accidental death of a black marketer haunts him and leads to further disaster. Brendon DuBois’s “The Last Flight,” a taut tale of revenge, and Lee Child’s “Safe Enough,” about a dark secret uniting an upscale woman and her electrician, will also linger for many readers. Cozy and fair-play fans won’t find much specifically aimed at them, but fans of quality short fiction should be satisfied.  Publishers Weekly

It’s true what they say: love hurts. Sample this collection of relationship-oriented mystery stories by Ridley Pearson, Harlan Coben, Lee Child, and 15 others, and you’ll see just how much. All except Coben’s contribution are published here for the first time, and they run the gamut from good to great: stories of love, hate, and betrayal. The only misfire is Coben’s 1997 story, “Entrapped,” which is good but uncomfortably similar to Vanishing Act, a 1986 TV movie by Columbo creators Richard Levinson and William Link. Aside from that bit of a letdown, mystery fans will find much to enjoy, and it’s nice to see what authors known for their novels can do with short stories.  Booklist