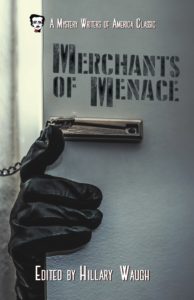 This is a most sinister sale you are partaking in. Join some of the finest purveyors of perfidy as they bring you tales of larceny, deception, and murder. Donald E. Westlake spins a story of a cheating wife who tries to turn the tables on her blackmailer, only to find herself caught in a bigger web of lies than she could have imagined. From Robert Bloch comes a story of a man whose very best friend who has the very worst plans for his wife. Miriam Allen deFord tells the mystery of a family that is disappearing of the face of the earth, one by one. And master of suspense Cornell Woolrich takes us south of the border for a sultry tale of jealousy, death, and revenge from beyond the grave. Twenty suspenseful stories, each one written by a true merchant of menace.

Foreward by Lawrence Block
Introduction by Hilary Waugh
H as in Homicide by Lawrence Treat
Domestic Intrigue by Donald E. Westlake
The Front Room by Michael Butterworth
The Real Bad Friend by Robert Bloch
Wide O— by Elsin Ann Gardner
Death on Christmas Eve by Stanley Ellin
Gone Girl by Ross Macdonald
The President’s Half Disme by Ellery Queen
Amateur Standing by Suzanne Blanc
The Peppermint-Striped Goodbye by Ron Goulart
Marmalade Wine by Joan Aiken
Counter Intelligence by Robert L. Fish
The Man Who Played Too Well by Don Von Elsner
Never Hit a Lady by Fred S. Tobey
Farewell to the Faulkners by Miriam Allen deFord
The Dead Past by Al Nussbaum
The Cries of Love by Patricia Highsmith
Something Evil in the House by Celia Fremlin
The Tilt of Death by Rod Amateau and David Davis
The Moon of Montezuma by Cornell Woolrich