The Prosecution Rests: New Stories About Courtrooms, Criminals, and the Law

From the Salem witch trials to Depression-era Chicago, from the exclusive country-clubs of the wealthy to the depths of today’s toughest ghettos, this riveting collection traces the triumphs, defeats, and temptations of two opposing sides: those sworn to defend the accused, and those tasked with prosecuting them. They are the stories of lawyers under pressure, of criminals facing the needle, and of the heartbroken families–of both the victim and the defendant–who hope for justice from the back of the courtroom, and who sometimes take it into their own hands. This tantalizing collection proves that after the crime is over, the real drama begins.

In James Grippando’s “Death, Cheated,” a lawyer defends his ex-girlfriend in a case against the investors who bet $1.5 million on her death. In Barbara Parker’s “A Clerk’s Life,” a disillusioned clerk at a corporate law firm suspects the worst of his colleagues when one of the firm’s employees is murdered. In Phyllis Cohen’s “Designer Justice,” a cold-blooded killer thinks he’s lucked out when he lands a high priced lawyer as his appointed attorney, only to learn that there are worse fates than being found guilty.

Filled with shocking twists, double-crosses, and edge-of-your seat suspense, this page-turning collection is not to be missed. 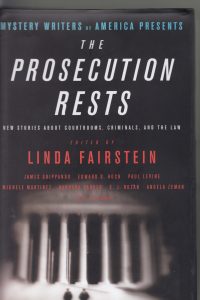 Starred Review. Bestseller Fairstein (Killer Heat) has put together a stellar anthology, presented by the Mystery Writers of America, that will appeal both to contemporary noir fans and devotees of Law & Order. The late Edward Hoch starts things off nicely with The Secret Session, a concise whodunit centering on judicial corruption at the appellate level. In Barbara Parker’s deliciously creepy A Clerk’s Life, a put-upon law clerk for a major Florida firm stumbles on two murders. Joel Goldman highlights the ethical challenges of criminal defense work in Knife Fight, as does Eileen Dunbaugh in The Letter. By way of counterpoint, Michele Martinez’s The Mother and Morley Swingle’s Hard Blows dramatize the challenges prosecutors encounter, even when the defendants they charge are, in fact, guilty. The consistently high quality of the 22 selections will lead many to hope the MWA will sponsor more volumes in this vein. Publishers Weekly

Courtroom drama has consumed the American psyche since Perry Mason (the O. J. trial didn’t hurt, either). In this terrific collection, 21 of today’s top legal-thriller writers present a small taste of what makes the courtroom setting so appealing. All the contributors are members of the Mystery Writers of America, and most are best-selling authors. While the courtroom is most definitely the star, many stories feature action outside the judge’s four walls and involving peripheral characters, including clerks in Barbara Parker’s “A Clerk’s Life” and debt collectors and bail bondsmen in Diana Hansen-Young’s “The Flashlight Game.” In others, while the setting might be a courtroom, the drama is more about the characters than the crime, as in Paul Levine’s “Mom Is My Co-Counsel.” The entries range from funny and quirky to dark and disturbing, but, taken as a whole, they make a thoroughly entertaining work of crime fiction. Booklist 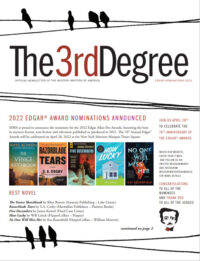