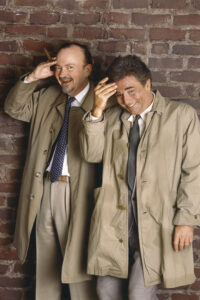 It is with profound sadness that we announce the passing of William Link.  He was the c0-creator of Columbo, Murder, She Wrote and many, many other TV programs during the 1970s and 1980s.  He wrote episodes of just about every crime show in the 1960s – from Richard Diamond, Private Detective (1960) to The Alfred Hitchcock Hour to The Fugitive to Mannix.

He will be missed!